“What they are doing is sharply escalating the situation,” Ted Wheeler said. 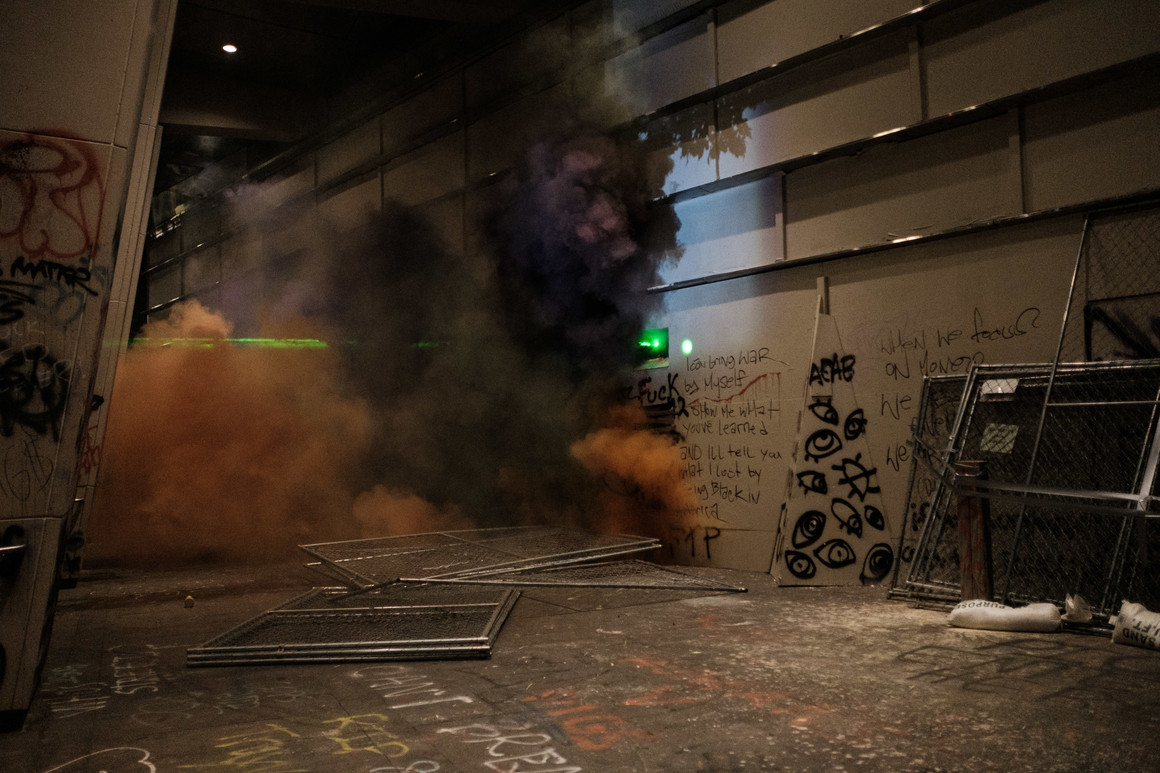 Leave my city alone.That was the message Mayor Ted Wheeler of Portland, Ore., had on Sunday for President Donald Trump in discussing the federal government’s response to ongoing protests and unrest in the city — in particular, the uninvited presence of militarized federal forces deployed by the Department of Homeland Security.

“What they are doing is sharply escalating the situation,” Wheeler told host Jake Tapper on CNN’s “State of the Union.” “Their presence here is actually leading to more violence and more vandalism. And it’s not helping the situation at all. They’re not wanted here.”

The mayor added: “In fact, we want them to leave.”

The situation in Oregon’s largest city has become part of the national debate over what represents appropriate protest — and what constitutes government oppression. Footage of people being scooped up on the streets of Portland and placed in vans has been circulated widely on social media in recent days, often accompanied by expressions of either delight or anger.

The deployment of federal agents has also fit with the president’s efforts to draw a contrast with Joe Biden, the presumptive Democratic presidential nominee, who Trump has claimed is not interested in law and order.

“The Radical Left Democrats, who totally control Biden, will destroy our Country as we know it,” Trump tweeted Sunday. “Unimaginably bad things would happen to America. Look at Portland, where the pols are just fine with 50 days of anarchy.”

Protests in Portland have continued since the death of George Floyd in Minnesota on Memorial Day. According to The Oregonian, the focus of the unrest has been a 12-block area; protests in other parts of the city have been largely without incident, but the disorder within the 12-block zone has included repeated skirmishes with police, as well as fires and vandalism.

In June, Wheeler called the destruction “a horrible, horrendous miscalculation.” One longtime community activist, Ronnie Herndon, added: “That is a tactic that’s been used to destroy Black people, not help Black people.” On Saturday, a fire was set at the Portland Police Association, and police used tear gas in an attempt to clear the area.

In recent days, federal forces have been detaining and arresting protesters, and reports indicate that they have sometimes done so without identifying themselves and that they are using unmarked vehicles. Wheeler said the government’s actions were in violation of the law and a threat to the nation’s democratic values.

“The tactics that the Trump administration are using on the streets of Portland are abhorrent,” Wheeler said, adding that people were being deprived of due process and being detained without probable cause.

“As far as I can see, this is completely unconstitutional,” Wheeler said.

The state of Oregon has sought to get rid of the federal agents, with Oregon‘s attorney general, Ellen Rosenblum, suing late Friday in federal court. The American Civil Liberties Union has also challenged the administration’s actions.

“Authoritarian governments, not democratic republics, send unmarked authorities after protesters,” Sen. Jeff Merkley (D-Ore.) tweeted on Thursday. “These Trump/Barr tactics designed to eliminate any accountability are absolutely unacceptable in America, and must end.” Sen. Ron Wyden (D-Ore.) added: “We must get to the bottom of these abuses against Oregonians.”

Trump also tweeted about the subject on Sunday morning: “We are trying to help Portland, not hurt it. Their leadership has, for months, lost control of the anarchists and agitators. They are missing in action. We must protect Federal property, AND OUR PEOPLE.”

Homeland Security Secretary Chad Wolf, during a visit on Thursday, said the city was facing chaos.

“Each night, lawless anarchists destroy and desecrate property, including the federal courthouse, and attack the brave law enforcement officers protecting it,” he said.

In response, Wheeler said the uninvited federal presence was making things only worse.

“The president has a complete misunderstanding of cause and effect,” he said. Wheeler said he was worried that if the federal agents remained, someone was going to get killed.

“We know that the presence of federal officers has inflamed the streets,” she told The Washington Post.

Wheeler did say there was a limit to what he or the governor could actually do to force Trump to remove the federal agents.

“We can build awareness, and that’s what we’re doing,” Wheeler said.

“From our federal congressional officers, to our governor, to our local elected officials, we’re all telling the Trump administration, stop the rhetoric,” he said. “Take these people out of our city. They are not helping us. They are hurting us. They’re escalating an already dangerous situation. And what I want to do is raise awareness nationally. This could happen in your city.